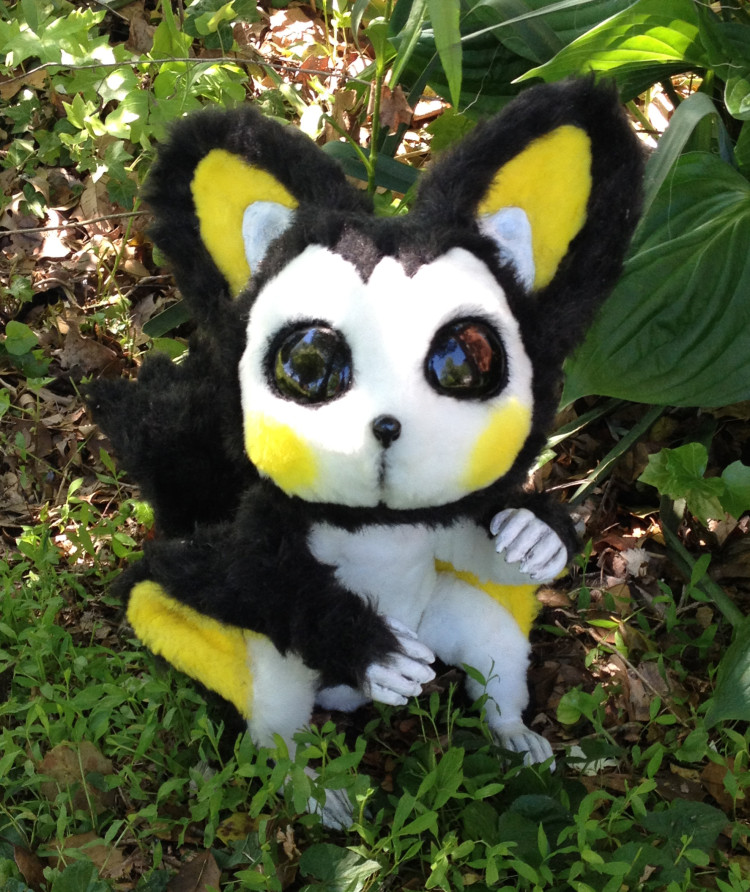 Please Note: This is not meant to be a tutorial on ‘how to make your own realistic Emolga’; it’s just a collection of steps I took to make mine. 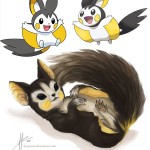 Emolga Progress Update 0 – References. I love Flying Squirrels, so Emolga is a favorite Pokemon. I wanted to try and bring out the cute qualities that I find adorable about real flying squirrels while still keeping with the basic shape. 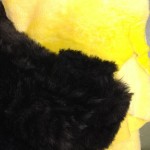 Emolga Progress Update 1 – FABRICS!!!! I originally started Emolga before Snivy, but had such a hard time deciding on furs that I put Emolga aside to work with a Pokemon I had fabrics for already. I really really wanted to have a more natural black fur, which is generally made up of multiple colored fibers. The natural fabrics I found were really more towards the grey side, and it was still important that Emolga didn’t stray from the black/yellow/white theme. (Mostly because I wanted to use it for an Elesa cosplay, and she her color scheme uses true black.

In the end I bought a medium pile multicolored grey fur from Joann’s and used layers of soft fabric spray paint to make it darker. Upon closer inspection you can see that the fur still has variety of color, but is mostly black. Sadly, I had to compromise the softness of the fur, as paint hardens it. I found a good short pile white fur on ebay and used yellow fabric spray paint to color that.

If you decide to spray paint fur, be sure to use a cat brush on the fur!! It’ll help break up the clumps. (I would provide links to where you can purchase the fur I used, but they aren’t listed anywhere I could find.) 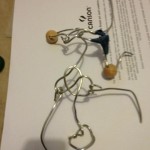 Emolga Progress Update 2 – Wire Skeleton. Since I didn’t know what I was doing…I kinda followed this girl’s steps:
http://trublueart.wordpress.com/2011/08/12/oooh-progress/

I was really inspired by Wood Splitter Lee’s creations and was really hoping it’d be as adorable as her’s. Nope. 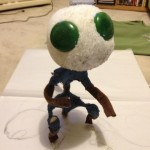 Foam circle was sanded down to the right size and resin gems left over from Lina Inverse were set into it. 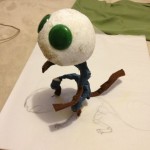 Emolga Progress Update 3.5 – You can see the to life sketch of how large I wanted the Emolga to be. With this sketch I can compare and alter the 3D Emolga accordingly. 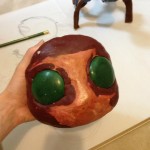 Emolga Progress Update 4 – First attempt at the basic face scuplt. (Will be painting the eyes, eventually) I really really want to work with Sculpey on this project, as I’m more confident in using it, but I found it was way too heavy. That and peeling it off the styrofoam while keeping it’s shape was not happening. (Need to cook it) 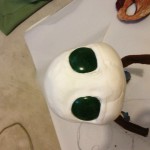 Emolga Progress Update 5 – Went out and bought crayola super lightweight air dry clay. (Was trying to buy Hearty lightweight clay, but none of my local stores carry it and I was too impatient to wait for mail.) Working with the crayola clay was taxing, as it wasn’t as easily sculpt-able; but it was more important that I had a lightweight clay so Emolga would be able to stand on it’s hind legs without toppling over. 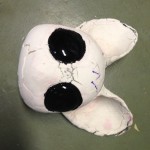 Emolga Progress Update 6 – Unfortunately the crayola air dry clay cracked a lot. I had to fill in the huge gaps with more clay and it still wasn’t enough. I had to make a decision, and since the clay was being fussy, I decided to cover it all up with fabric as opposed to leaving some areas, like the nose and outer eyes bare. Not exactly how I was hoping to go with Emolga, as it  looks less realistic this way, but still learning. :/ 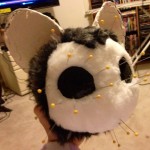 Emolga Progress Update 7 – Fortunately the fur was slightly stretchy so I could really mold it around the face. The clay served as a really good understructure for the face. That I was grateful for! If I ever know ahead of
time that I want to cover a face in fur, I will most definitely use the crayola clay to sculpt the face. Cracked or not, it serves as both structure and a good surface to used glue on. 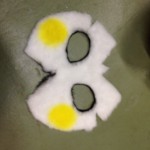 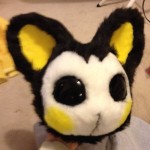 I used some mock up fabric to figure out the shapes of the fur. Trial and error mostly.

Using both soft fabric spray paint colors (black and brits yellow), I painted the white fur face. I wanted to to give more depth around
the eyes and enhance the bought area. Unfortunately I went a little too far down in the mouth area and it just looks like an awkward line cutting down the face. :/

Once I got the facial pieces patterned out, I just hot glued everything starting around the eyed. It all took really well and the process went pretty fast. 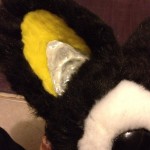 Emolga Progress Update 8 – While I didn’t get to use as much sculpey as I had originally planned, I still used it to mold the inside of the ears, nose, ands and feet. 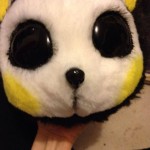 I painted them with acrylic paint and coated them with sealer. I chose to used e6000 (as opposed to hot glue) to attach the sculpey parts to the fur. Glad I went that route. 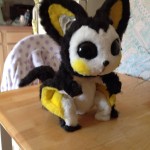 Emolga Progress Update 9 – I missed quite a few steps, thinking I had documented them already. :/  Before the fur went onto the body I had to build a ‘skeleton’ around the wire structure. I used multiple bean bags to build out the chest/pelvic area and layered fleece around the limbs until it was the thickness I wanted. After that it was just a matter of patterning out the fur and hot gluing them onto the fleece ‘skeleton’.

The process was a lot simpler than I had thought it’d be; the hardest area of Emolga was the face. 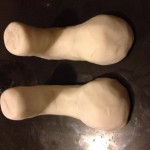 Emolga Progress Update 10 – I had wanted to make super realistic hands and feet, but I lacked the skill and the knowledge on how to make unbreakable realistic rodent digits. I was happy with how the back feet looked, but the front hands weren’t what I had hoped for. 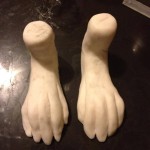 After they baked I painted them with acrylics and sealed them. Holes were drilled at the tops so the wire frame could fit and e6000 was used to glue the wire in the holes. The loose fur around the hands and feet were attached to the sculpey hands and feet with hot glue.

This was the final step! After the glue dried Emolga was done.