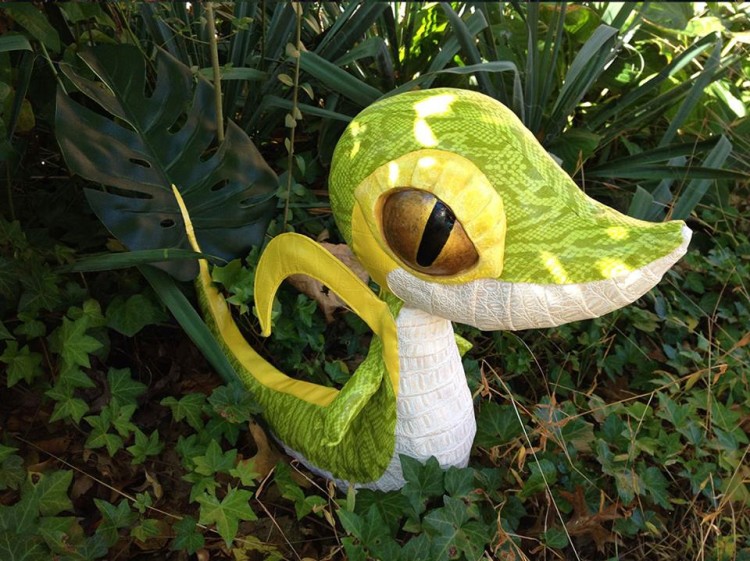 Please Note: Verbage is made up of updates and is not meant to be a tutorial on ‘how to make your own Snivy’. 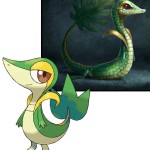 Snivy Progress Update 0 – References. So I’m trying to make a more realistic version of the Smugleaf, I mean Snivy. I’m not making this one per se, but I like how it adds lizard elements into the design. I always thought snake + ivy = Snivy ….but geckos are really attractive reptiles, so let’s go ahead and add some of those elements too. 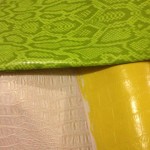 Snivy Progress Update 1 – FABRICS!!!! So pretty!! The pearl and yellow will also be used for Totodile!

I bought the green off of ebay (sorry, no more!) and the crocodile ‘cream’ and yellow vinyls off of fabric.com. I was a little hesitant buying these vinyls without seeing them first (I have purchased 4 other vinyls for this project and they were all the wrong colors), but I was very happy with these two. 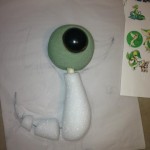 Snivy Progress Update 2 – Started the project by drawing a to scale picture of Snivy’s proportions. I didn’t go by the size wiki says he is, rather I went with the size I wanted him to be. He should stand a little above my knee.

I used various shaped styrofoam to create the base body. Wire through the tail so it is movable and there is a wooden dowel attached to a wood ball (in the head) so it can turn slightly. 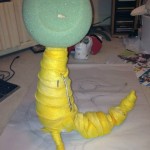 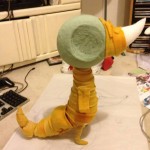 Snivy Progress Update 4 – Added the nose foam piece and bean weights to the base of the tail. Wrapped more fleece around the tail. Also discovered that the ONLY way Snivy will stand is if his tail props him up. I am okay with this. 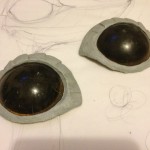 Snivy Progress Update 5 – Sculpted the eyelids with sculpey and baked them with the resin eyes. Unfortunately on of the resin eyes cracked a bit, but I had planned to paint them anyway.

Snivy Progress Update 6 – He is so smugleaf. As you can see I’m patterning the green skin. 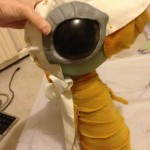 Snivy Progress Update 7 – Because his tail is now lower, since it helps keep him standing, I decided to elongate it.

Also, still working out the patterning. 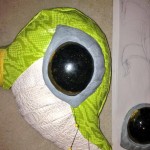 Snivy Progress Update 8 – After patterning the cream and green head parts, I sewed them together to see what I got. 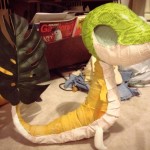 Put Snivy on hold for a bit, but am starting back up! I finally hot glued his belly and green ‘skin’ on. Made his feet out of sculpey and sanded them down. Also found the perfect large leaf for his tail at joann fabrics. Now I need to finish the green for his back, make the yellow accents, and paint his eyes! Back to work. 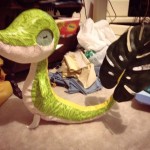 Legs made out of sculpey and then painted with a combination of nail polishes and acrylic paints. (It’s just what I had, and since the cream fabric has some metallic in it, I wanted the legs to have some too. Hense the nail polishes.

Because I covered Snivy’s ‘skeleton’ in fleece, I was easily able to hot glue the cream and green vinyls right to it. 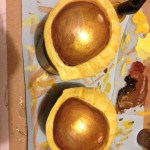 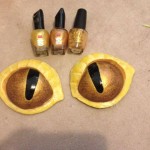 Snivy Progress Update 11 -To get the darker blotchy texture in the eyes, I painted an inch of cotton lace with a darker, watered down brown acrylic. I blotted the excess paint on a piece of paper and then blotted the desired areas of the eyes.

The black pupils are contact paper painted with black nail polish. I did it that way because I didn’t want to mess up the eye I just spent so much time painting. 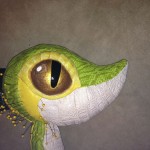 Snivy Progress Update 12 – Why are there so many pins? That is how I get my fabrics to really stick to each other using e6000 glue.

I also used e6000 glue to attach the eyes to the head. I was honestly a bit skeptical, since they eyes are pretty heavy, but it worked beautifully.

I placed glue on the entire eye backing area where it would make contact with the fabric. From there I put the glued eye face down on a soft pillowy surface (with a piece of fabric to protect the resin eye in between the pillow) and the put place my heavy bin of acrylic paints on top of it to dry.

I let it set for a good 8 hours and then did the other eye. This time placing a pillow on both sides of the head, one for each eye. Then the bin went on top again. 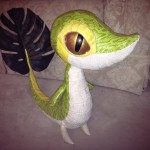 Snivy Progress Update 13 – Just need to add the rest of his yellow accents (and perhaps repair his eye that cracked when I manhandled glueing it on…). 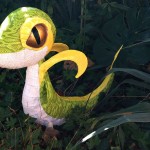 Snivy Progress Update 14 – DONE!!! I took him outside for a picture and I love that his tail blends in so well!!

The yellow ‘collar’ accents were sewn together and glued on using e6000. There is also some plastic boning in there so it can be slightly positioned, but still have it’s basic form.

I think I will be able to shoot Pokemon Trainer Hilda this weekend! Which is great since I don’t have any good pics of that cosplay.