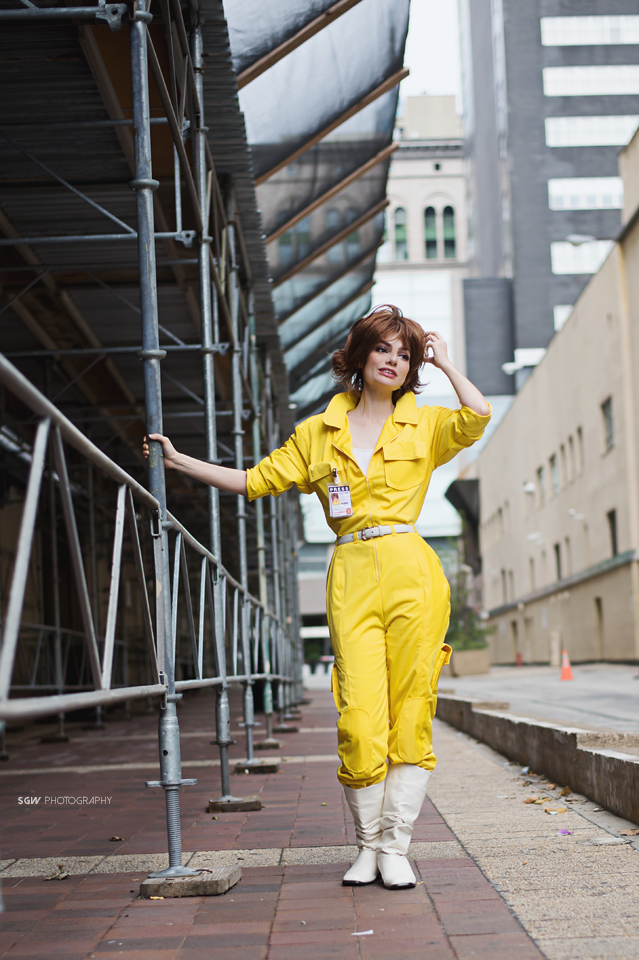 YAY! Aside from BTAS, TMNT was the show I raced home from school to watch. Mikey was my favorite turtle growing up, and of course I loved April, with her red hair and outrageous jumpsuit. I don’t remember what inspired me to make April O’neil’s cosplay, whether it was a particular convention or a conversation I had had…or maybe it was because I was re-watching the cartoon, but I’m glad she happened!

I was able to find a more realistic 90’s-ish red wig online, and scored a pair of perfect white boots at a thrift store. Also found turtle comms on ebay and a retro video camera at a different thrift store. The material was a little more difficult; I knew that I wanted something thicker, and preferably something that didn’t wrinkle, but nothing stood out to me. I ended up finding, what I think is, diaper fabric in the Joann’s baby section. It’s the perfect color, and is somewhat water proof, but was a pain to stitch through with a double needle!

Not gonna lie, I had a really hard time with the patterning. The pants part of the jumpsuit makes very little sense in the sketch. There are lots of odd seam choices. In order to make it work I had to fudge some things a bit, and in the end it happened. But I was really stumped for a while there.

I don’t know what possessed me to line it with really unbreathable fabric, but that bad decision was very clear when I wore it in the summer for a Philly shoot! I’m really glad the shoot was set for early in the morning before everything warmed up! I was really really feeling it by the end. But that means it’s a good cold weather cosplay!

Please try entering https://graph.facebook.com/267977519946769/photos?fields=source,link,name,images,album&limit=200 into your URL bar and seeing if the page loads.Facebook API came back with a faulty result. You may be accessing an album you do not have permissions to access.