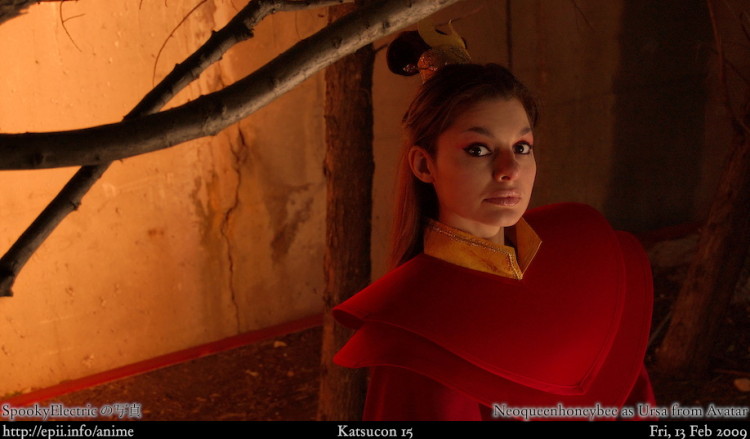 One does not simply choose an Avatar the Last Airbender cosplay…well, yeah, you totally do. Though it was a tough choice as there are so many great character options. Ceratopian and I knew we wanted to do something recognizable from the series, but not necessarily a main character. We had gone back and forth discussing who we would cosplay (we like to make sense cosplaying together) and in the end her picks were Kya (Katara and Sokka’s mom) and Song, the Korean dressed Earth Kingdom citizen that helped Zuko. My picks were Lady Ursa/Princess Ursa, (Zuko’s mom) if she wanted to go with the mom theme, or June the bounty hunter, one of my favorite side characters. For easier recognition, we both decided to go with the moms, because even if people didn’t know who we were, they would still know what series we were from as our outfits were clearly Fire and Water Nation.

And we were right! Only a handful of people knew my character was Princess Ursa, but a lot of people came up to us saying they loved our Azula and Katara cosplay. I even got Fire Lord Ozai a few times!

Since making Ursa, I’ve worn her to a few cons, most recently to AX 2012, and I was greatly surprised at how many people knew my character and her name! Such a huge difference from 2009. I still have a strong desire to take a ‘family’ portrait, with at least a kid Zuko. Sadly…I don’t know of any kids who cosplay, and I don’t have any accessible to me. Maybe one day it might happen.

Oh, and on a fun side note, we both used our real hair for this cosplay.