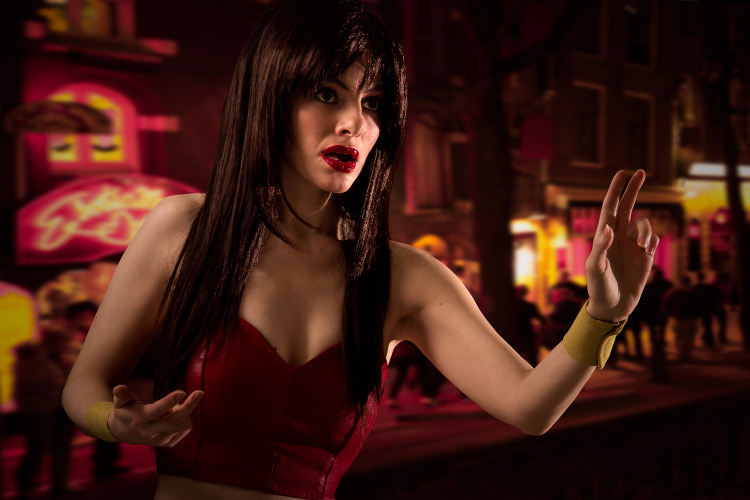 After making and wearing my Streets of Rage 3, American color variant Blaze Fielding, I knew I just had to do a red version. Griffin messaged me about his plans for orchestrating a SoR2 video short, on top of a photo shoot, with a full group for MAGFest 2014. He asked me to be Blaze again, and I was in. Fast forwarding a bit, Griffin cosplayed Axel, Steve cosplayed  Max, and Jordan opted out of doing Skate and cosplayed Adam instead.

I absolutely wanted to make her outfit out of leather from the start, but finding her shoes would dictate my fabric choice. After using mediocre Google-fu, I finally found a pair of shoes that I liked on ebay. At first I was slightly disappointed because they weren’t as bright red in person, and Blaze wears BRIGHT red. But those were my shoes and the next difficulty was to find material to match it. Time was running out, since I had some issues finding a color match to my shoes. I had used the previous red vinyl I (purchased for SoR3 Blaze, but didn’t like in person) to make the SoR2 outfit, just in case I would be unable to find a better material. The fabric just wasn’t as nice and I was unhappy with the results, but at least I’d have a cosplay…even if the fabric was brighter than the shoes.

Luck was with me though, and just in time. About a month before the convention I found a large red leather trench coat at a thrift store, which was also a perfect color match for my shoes. I was hoping that I could salvage to top portion so I could to SoR1 Blaze, buuuuuuut I needed to used the entire coat to make my skirt and top. Fortunately I already had the pattern from the previous version I made, so I was able to make it pretty quickly. (Which was great because tearing a part a full length, lined, leather coat is time consuming.)

Wearing her was so much fun. I’ve loved Blaze since I started playing SoR in ’93. Most images in the gallery are photos from the video shoot. Most are up there to show how much fun we had together, working on this project.

Huge thanks to Griffin, for planning everything, and paying for a videographer! To Nick Lang, our videographer, who worked with Griffin to make his vision a reality. And to Steve and Jordan, for being awesome and joining us for old school cosplay shenanigans.