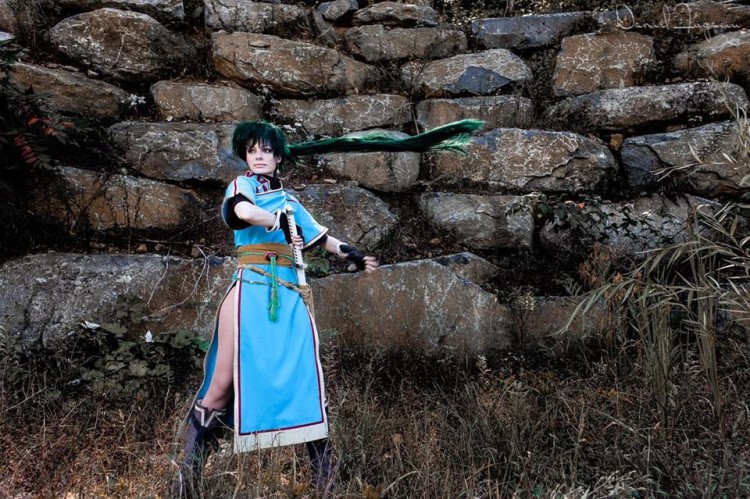 This was an unexpected cosplay on my part; having grown up a SEGA loyalist, I never had the pleasure of playing Fire Emblem games until recently. However, being one of Ceratopian’s favorite game franchises, she really wanted me to cosplay as Lyndis. Lol, she knows me, I love cosplaying old school and obscure, and since Fire Emblem: Blazing Sword was the first FE to come to America, it kind of got lost with time. She had made a Florina cosplay a while back, but wanted to remake her and have me join in on the cosplay fun. She had also recently gotten me into Fire Emblem:Awakening, and recruited me to cosplay as Tharja for her Nowi.

Usually I prefer cosplaying characters I know and adore, but Cera and I sometimes do a cosplay exchange, where she picks a character for me to do and I pick one for her. The trade off was she had to agree to make Grandia’s Feena to match my Leen. >:}

But I had a surprisingly fun time making Lyn; I was fortunate enough to find more than perfect fabrics for her. And since her outfit was so simple, I decided to dabble in simple embroidery. I have an awesome sewing machine that is fully capable of major embroidery. Unfortunately I have never explored that part of it. In the end I was really happy with how it turned out.

I also ended up buying two swords at Otakon; one live steel and one with a wooden blade. I prefer to use the live steel version for pictures, but at cons I will be unable to use it. :/