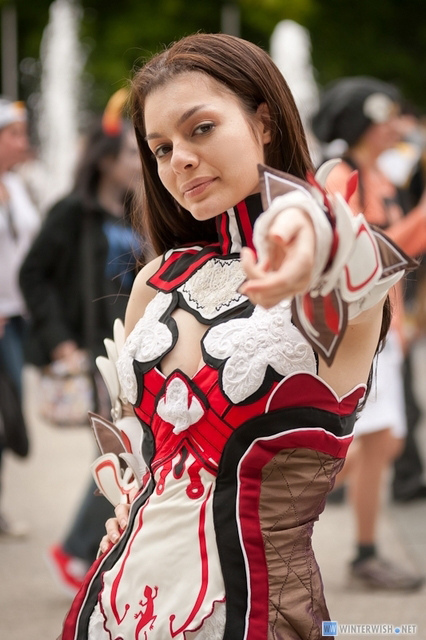 This cosplay has been a long time coming; I was supposed to have it done by Otakon 2010, but things did not work out so well. I had a lot of set backs and I got a little overwhelmed. But now that it is done, I’m really happy that I was able to get through it! I test wore it (unfinished) for Katsucon 2011 and debuted it at Fanime 2011.

Envirion and I have been cosplaying Hyung Tae Kim designs since 2001 and I had made a silent promise to myself: if HTK ever designed a character with my name, I would cosplay her. When I saw that this had in fact happened, I had no choice but to cosplay her! Really, there was no choice. (I was really happy that she was mostly ‘modest’.) TT_TT

Envirion cosplayed her amazing Rue, and we met with new and old cosplay friends to make a Magna Carta gathering happen. We had a Celestin, Raud, and Claire Setilan from MC2, and Serina and Reith from MC: Crimson Stigmata.

We hope to rewear our MC2 cosplays for Anime Expo 2012, as well as make some new ones from War of Genesis and Blade and Soul! Envi and I are attempting to remake our Beramode and Carlos cosplays in celebration of our 10 Year Conniversary! We’ll see how that goes!

I had never done a cosplay as complex as this one. To be honest I’ve only done pretty simple cosplays, so when I endeavored to make this Melissa Tiss cosplay, I was in a little over my head. I had no idea how I was going to do certain things and pattern others. The outfit only really started coming together for me when my friend, Ana Aesthetic, showed my how to work with leather! While I only used a little leather in the outfit, it really added a beautiful element.

I had a hard time finding reference for the front of this outfit and had to make a few things up. Ha ha ha, then after I made it I found the reference that I needed!! I still want to go back and add a few more leather accents, but for the most part I’m really happy with how this one turned out.

Also, I was really excited when this cosplay made it into Cosmode 57’s Cosnaps!