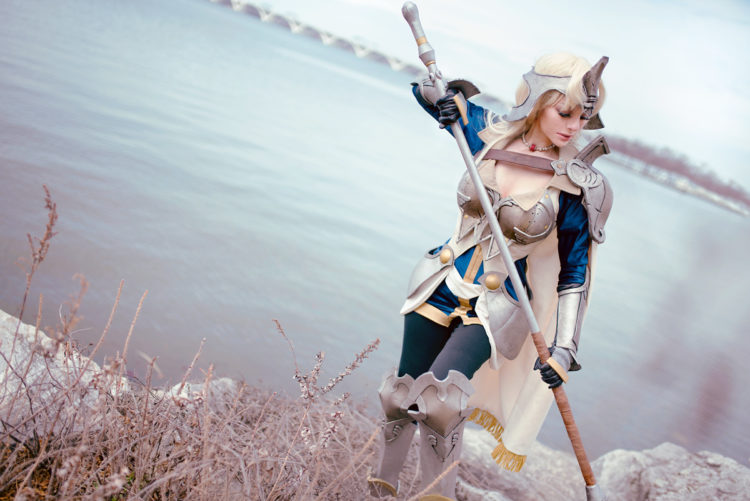 I was really excited about Echoes and the idea that older remakes are a possibility. While I hope they continue to make new games I really hope they keep older games in mind! In full support I bought the special edition and when I initially looked at the artbook, I was really interested in Clair’s design. However when I met her in game I was less than impressed with her demeanor (she grows as a character though and I ended up liking her in the end). After I decided not to cosplay Clair, I discovered Mathilda and really liked her design; I knew immediately I’d be making her (why was she not in the artbook? lol).

I was very particular with fabrics, since there isn’t much to the fabric portions or her costume, and I was pretty set on using a velvet material and a matte gold for the trim. Fortunately those were easy enough to find at my local Joann’s and outlet stores. As usual, armor, armor, armor! I was mocking up armor with my Alm and by the time I mocked up my shoulder piece she had half of hers drawn and cut out of paper!! Running gag about my armor making skillz. ORZ

One of the things that I loved about all the armor designs is that they were scuffed and looked battle worn;  I just go crazy for that!

Many sleepless nights in trying to complete her armor by Katsucon; I was half dead at that con (I am so sorry if we met and I was…not a person). But I was very happy with how the armor turned out considering I rusehd it. I found the perfect spray paints at PepBoys and while I failed the gauntlets (I failed to take into account some sizing and made them too small; they burst open eventually) everything else pretty much worked out. Well, ok the shoes!! They would have been perfect if I had filled the shoes before gluing all the armor to them…making them too small for my feet! I was in a LOT of pain! Ha ha ha.

The spear! Ha ha ha was a very last minute make and I tried, tried to make it collapsible, but in the end it turned into a wonky wilted point spear. Hey, I tried something new!!

I did something crazy and set up an Alm only path; we almost had a full group!! We all pooled our monies together and rented out Fonthill Castle and it was…one of the most epic things. I’ll make a separate post about that adventure, but the main thing was I wanted a CLIVE. Solution? I made Clive for a friend! Again, separate post for Clive’s cosplay making adventure! (I also made Luthier LOL)

Clive would not have been as complete without the awesome help of Anthony, Kira and Luca Allen! <3 <3 Anthony spray painted half of the armor while I was ferrying people from the airport!  And Luca helped put the finishing touches on him at 3am!!