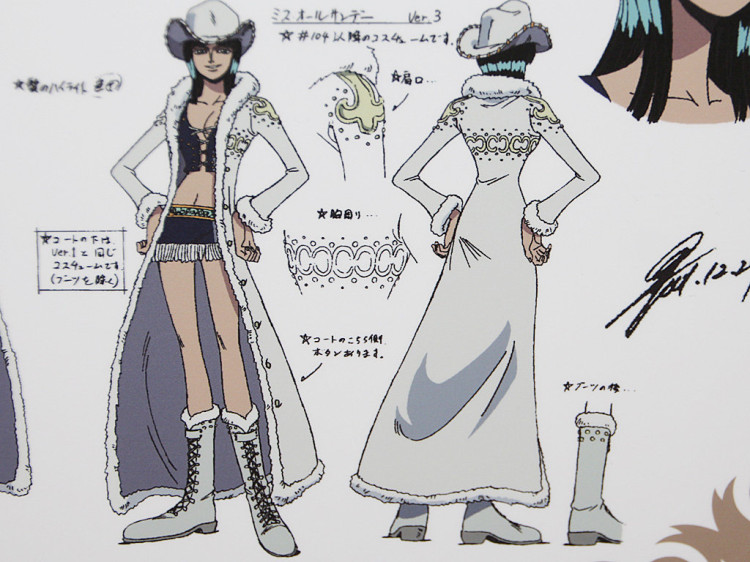 One pattern, two coats, six mock-ups, and three different results. The Simplicity pattern 4962 was a  decent pattern to use for the coats; though I had to slightly alter a bit for Nico Robin’s and use a different pattern’s cuffs for Alvida’s. Still, the coats are pretty much the same.

I always make a mock up before using the good fabric, but even then sometimes things don’t work out. I had made my mock up for Alvida’s coat and all fit well after messing with seam allowances and refining the pattern a bit. For the most part I used the pattern as it came.

I found a really nice purple knit fabric for Alvida, and used my mock up as a pattern for her coat, It turned out beautifully and I was super happy with the result; it fit nicely, the fabric fell the way it should and there was no puckering around the seams. I had made sure to use iron on interfacing on the knit because my friend, Ceratopian, who worked with the same fabric prior to my project, warned me that it frayed like a beast. I made Alvida’s coat first because I wanted Robin’s to be perfect and thought I could work out unexpected kinks with hers. Except Alvida’s was made without a hitch.

Miss All Sunday Coat 1 – I used the exact pattern for Miss All Sunday’s coat. The first version of her coat was made with a lighter weight fabric, and even though I interfaced it, you could see impressions of the clothes underneath it, through the fabric. It also wrinkled way too much and it ended up pulling oddly due to the interfacing. Since Nico Robin is my favorite OP heroine, I could not be happy with the result. But it worked out because I needed a lining for Alvida’s coat. (Still needs a lot of work to transform into the lining!)

Miss All Sunday Coat 2 – I then tried working with a different fabric and noticed puckering around the bust area. I had done nothing differently from the Alvida version and was slightly annoyed that this version wasn’t looking as nice. I ended up ripping all the seams and pinning the fabric as it fell, disregarding the pattern’s notches (match points). This of course meant that the fabric became uneven at the bottom and other things, like shoulders and sleeves, would be affected. Even at the end I just didn’t like the fabric; I had envisioned her coat to be wool, and this fabric didn’t do much for me. But still not a waste; I ended up dying it purple to used for Nico’s lining. (I didn’t get a picture of it as a stand alone coat, but this is it as lining for the final version.)

Miss All Sunday Coat 3 – It was time to stop using ‘okay’ fabrics I had in my stash and actually buy new fabric. I went to my local Jomar hoping to find a nice white wool, or other upholstery fabric. I ended up finding a white velvet upholstery that was closer to what I had originally envisioned, but I it was a remnant and I didn’t think there was enough fabric to make my coat, sleeves and hat. (I bought it anyway) So I ended up buying a really cool pearl upholstery fabric instead. Again, used the original mock up as a pattern and the same thing was happening; puckering around bust seams and uneven pulling of the the rest of the seams. Even with a walking foot. I ripped the seams and pinned the fabric as it fell, which made everything uneven, but the seams were still pulling oddly. I ended up deciding to just go with it because the fabric was really interesting and I liked that it was pearl and not white (in the pictures her coat looks off white in comparison to her white fur trim). I was honestly not happy with how it fell, and the fabric was high maintenance since it could not handle a higher iron setting (or it’d melt). But I was kinda tired of making coat after coat…..until it was 2am in the morning and I was trying to iron on her yellow ‘C’ appliqués. Yup, accidentally set it too high and I melted part of the coat. This version was unsalvageable. (Pictured are the two different fabrics; pearl and velvet, with the white fur)

Miss All Sunday Coat 4 –  Needless to say I was frustrated. I pulled out the remnant fabric I had purchased and it was literately just enough for her coat (not hat too). I really had to strategically arrange the pieces to be able to fit the sleeves on the fabric and there was no room to add more space to pattern in any area. With 3 tries under my belt, I assumed I would have the same puckering issue, so I pinned a small portion of the bust area to sew; yes. Ripped that small seam area and pinned the fabric as it fell. Now this fabric had no give what so ever, unlike the previous fabrics I worked with. No stretch. After sewing the pieces together, and the sleeves on, I realized that due to 1) the type of fabric, and 2) the way I had to pin it for it to fall nicely with no seam puckerings/pulling, it got super tight in the shoulder and sleeve area. So tight in fact that I can’t move that much in it. And if I gain weight I won’t be able to fit in it! But it looked really nice, and I was not making another one.

Conclusion
It’s just amazing how different fabrics can make or break a project.