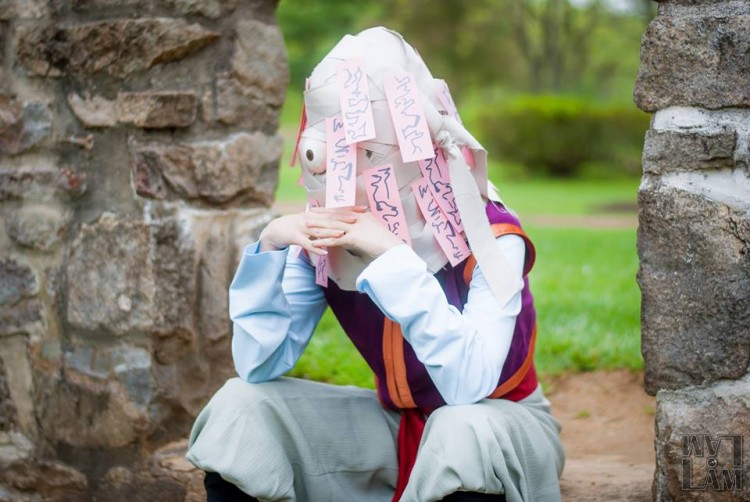 Mukuro is such a tragic character it’s really hard not to like her. In the anime they changed her backstory so it wasn’t as upsetting, but in the manga she was raised as a sex slave and endured much suffering. In order to escape it she poured acid over herself to make her less appealing. It worked and her ‘rebirth’ began a path to becoming one of the most, if not most, powerful mazoku in the demon world.

I have been wanting to cosplay her for years, but never got around to making her till now. I had intended to make her unwrapped head version, but turns out I never ordered the wig I thought I had. So on a deadline I needed to just make this version instead. One day I want to do the unmasked Mukuro!

I was fortunate to have all of her materials on hand, though when you have a stock of fabrics that isn’t a huge achievement.

The headpiece was simpler than I had expected it to be; I made a base ‘mask’ shape out of felt and cut lots of 2 inch strips of the bandage fabric. I just began wrapping the bas mask and hot glueing the bandages on in select areas. The bandage material was slightly stretchy so I wasn’t too worried about getting into and out of the mask.

The eye’s base was a rejected resin gem cast from Lina Inverse. I had tried using rub n buff to make it white, but that didn’t go so well. I then used a few coats of spray paint and then acrylics to get in the finer details. Her iris was painted with acrylics but then coated with clear nail polish to give it a nice shine.