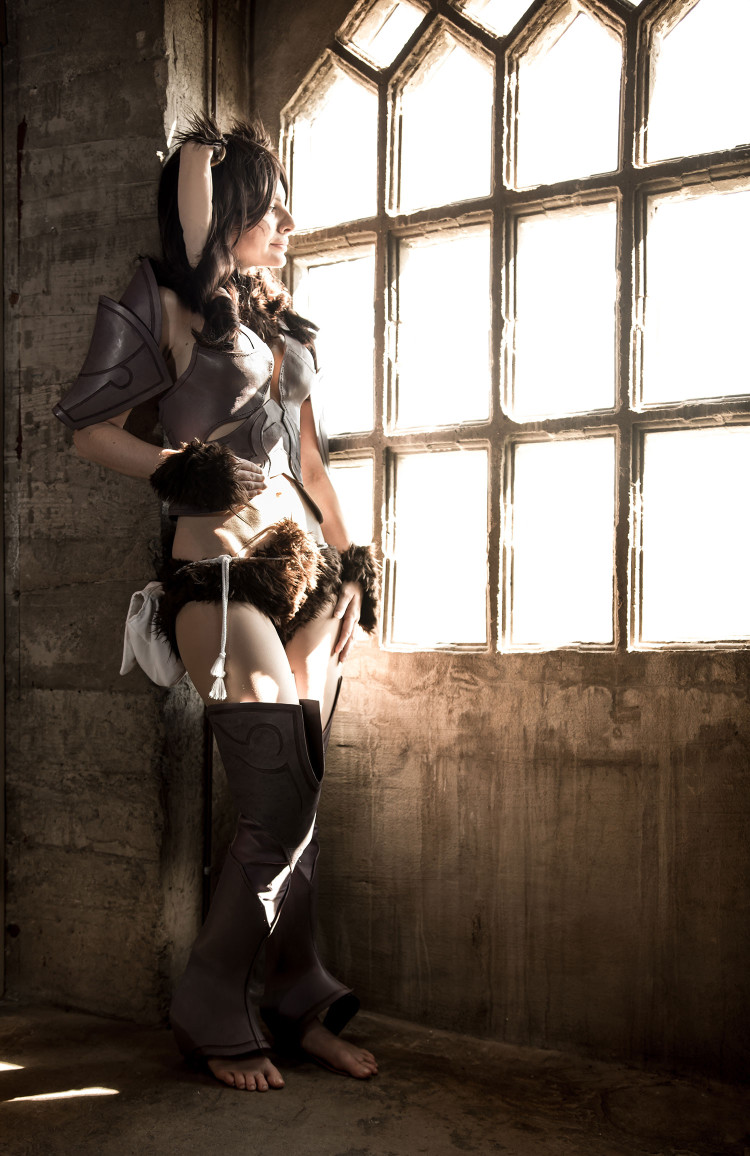 After actually playing Fire Emblem: Awakening, I decided that Panne was my girl and that I wanted to make her armor from real leather. I’d only done very small leather pieces for Lina and Melissa Tiss, but had all the tools to do more. The most difficult part was mocking up the armor and figuring out the different pieces and how they’d connect. I used paper to make mock up after mock up until the proportions and sizing was right.

After cutting the pieces out and detailing them I soaked them in water to shaped them over a plastic mannequin torso. When they fully dried I carefully glued the pieces together with e6000. Then I hammered holes into certain places so I could additionally stitch areas together for both detailing and a stronger hold. The torso armor stitches up in the back like a corset, but I need help getting in and out of it.

The boots gave me a headache since I wanted to stick with leather, but it wouldn’t be bendable at the knees. The only way I found to make my boot work was to make it three parts, top middle and bottom. The middle section (where the knee is) had to be made out of fabric. I also lined/interfaced the fabric with a still upholstery vinyl. Side note, I really wanted to find a matching soft leather, but could not. I ended up using the only fabric I could find that was the best color match, which happened to be satin (shinier than the leather, so it’s pretty obvious it doesn’t belong). I hope to find a different material that matches and looks good with the leather.

After wearing this at Katsu, I found that I need to remake the bottom leather section. The open feet section was not tall enough so when I walked up and down stairs, it scraped my foot up pretty badly.  Also the leather I used for the bottom part wasn’t sturdy enough, so it didn’t hold the proper shape; I need to somehow support the sides, to avoid a sag at the bottom. (You can see the bottom part looking much wider than it should be in the pics)Additionally, the naked foot shoes I made needed to have more arch support. I made mine from the same leather and used clear cord to keep it around my toe and heel. Two to three hours in my feet were not happy. I think it was partially because I went outside and the leather got wet, undoing the shape I had originally given it.

Please try entering https://graph.facebook.com/800741613337021/photos?fields=source,link,name,images,album&limit=200 into your URL bar and seeing if the page loads.Facebook API came back with a faulty result. You may be accessing an album you do not have permissions to access.