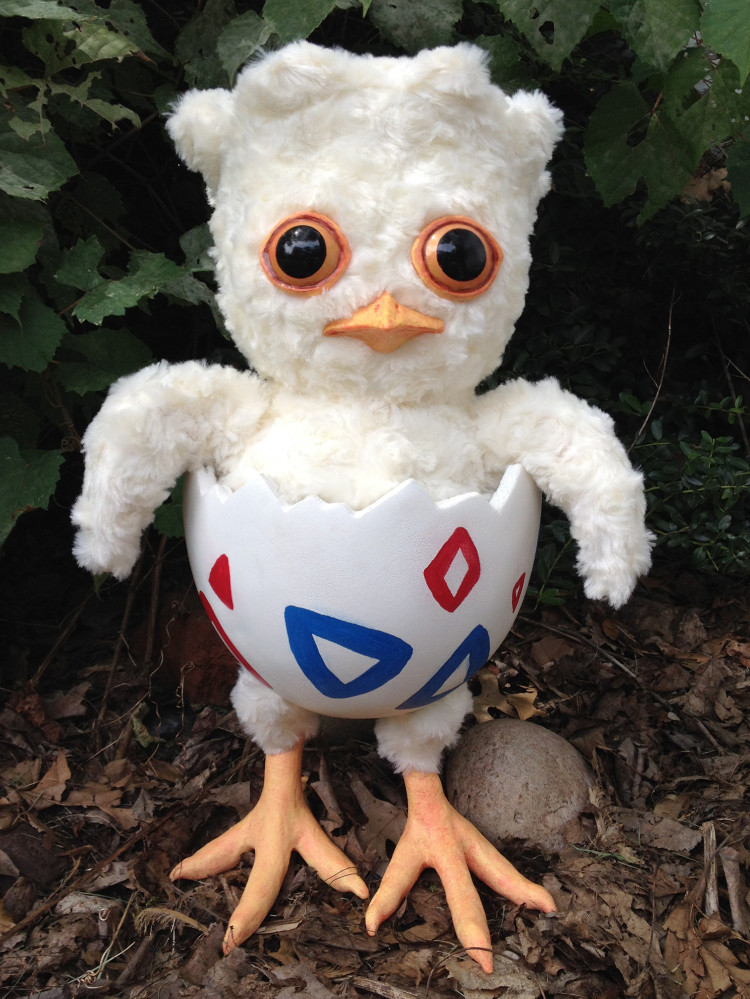 Please Note: This is not meant to be a tutorial on ‘how to make your own Togepi’; it’s just a collection of steps I took to make mine.

Togepi Progress Update 0 – I thought this was a good interpretation. As weird as Togepi is, it’s a chick. It is a half hatched chick. End of story. So I’ll be looking for fuzz fabric that best mocks a chick texture. Already have the large egg purchased at Michaels!

Togepi Progress Update 1 – I really wish I had drawn a to-scale version of this because the end product was way larger than I had wanted it to be. Togepi is supposed to be a foot tall, but mine stand a solid sixteen inches; which makes Togepi almost as tall as Snivy….which should totally not be the case!

I had a hard time finding fabric for this; I wanted something that resembled chick fuzz, but had very little luck. I ended up settling for a patterned plush material found at Joann’s.

Togepi Progress Update 2 – The pink egg was found at Michael’s around Easter time. It came in a ‘pack’ of three different sized large eggs stacked in one another. I used the middle size. Unfortunately they had textured patterns on them, so I decided to cover the desired area with fast mâché.

Fast mâché worked better than I had expected, which was great. Had to build it up, let if completely dry, and then sand the mess out of it.

Togepi Progress Update 3 – After it was mostly sanded I drew out the desired egg shell cut and used an exacto blade to cut the clay and a dremel to cut the plastic.

Togepi Progress Update 4 – I opted for chicken feet since they would really help stabilize Togepi; I had played around with making stubs, like the original design, but then it wouldn’t be able to stand up.

Glad that I decided to go with the chicken feet design as they really did help keep the egg balanced. I did end up needing to make the feet larger than I had anticipated so it didn’t topple over.

Togepi Progress Update 5 – Used Sculpey to cover the wire; wasn’t sure how it’d turn out but was pretty pleased with the results.

Togepi Progress Update 6 – I wanted a textured look to the legs so after I sealed the sculpey I mixed a darker orange acrylic with mod podge and layered it onto the feet. Then I used a paper towel to dab on lighter colors to give some depth. And less shine.

Once I got it this far I cut down a bit of the top sculpey to make it fit better in the holes I made on the bottom of the shell. Togepi also stood really high, so I kept taking parts off the top until I arrived at the desired height. (Which still ended up being too tall)

Togepi Progress Update 8 – So they eyes…I’m still experimenting on how to make really cute, appealing eyes for my pokemon. I really lucked out with Snivy, but the all black eyes for Emolga didn’t work as I had planned, so I thought I’d try making these eyes more realistic.

Using left over resin gems and sculpey to make the eyes; same as I’ve done with all pokemon this far. Beak was made from sculpey too.

Togepi Progress Update 9 – Still me trying to figure out how Topegi would be put together. The egg shell was spray painted white and then hand painted with blue and red. Styrofoam was again used as the base and wire for parts that I wanted to move.

Togepi Progress Update 10 – The end product was pretty close to what I had sketched, but looks somewhat creepy. I don’t mind, as somone mentioned that it will scare off the kiddies.

Moral of this experience; always do a to scale drawing!