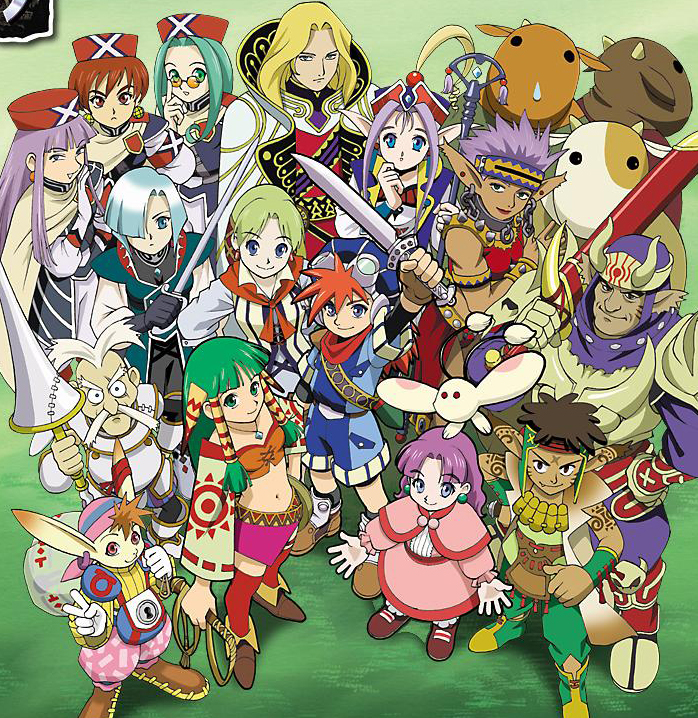 Because I’ve been slowly working on my Leen cosplay, I decided to replay Grandia; it’s been long enough since my first play through and I found myself forgetting a lot of the story line. I was sorta kinda holding out for a remake, like Lunar Silver Star on PSP, but figured I’d be waiting another 20 years.

I found it refreshing that Justin, the male protagonist, just wants to go on adventures. He doesn’t have a chip on his shoulder, he isn’t angsty or emo, he literally just wants to get out of his town and become an adventurer like his dad. I also really liked that the most famous adventurer in the guild is female, also known as Feena, the female protagonist. Justin is the eager newbie, while Feena is the slightly jaded, but fun loving professional. They are strong characters intheir own ways and maintain a feel-good momentum through the game.

The character humor is also pretty well timed. I think my favorite moment was when Gadwin decided to sacrifice himself for the greater good, telling his story of woe before he walked towards certain doom. Except, his armor was so large he couldn’t fit through the door. So here the player is expecting a party member to die, but then that is countered because of a ridiculous reason.

Secondary characters are all pretty good; Sue was the most surprising of all. She’s the childhood kid friend of Justin’s, who sets off to adventure with him. You think she’s going to be the jealous protective kid when Feena enters the scene, but she’s not. Then you think she can’t possibly be that good in battle, except her hits are stronger than Feena’s by a lot. I was really sad to see her go, but then I had room in my party to meet other characters; Rapp and Milda.

Milda is the only complaint I have (both times I’ve played). I really really want to love her. She looks awesome, doesn’t give a crud, and fights like a brute…but when she opens her mouth…I have no idea why they gave her the most unappealing southern accent. Voice overs can make or break a game for me (FFX), and all the other voices are really good. Except hers.

And as far as the battle system goes, I think I was too young the first time around to really explore what the system had to offer…maybe maybe not, it’s been a loooong while. But I love that you can set an action for the party and have it auto play. ‘Cause I pretty much play mostly JRPGs back to back…sometimes five at a time. Grinding can get….you know. But it’s not as bad if you have auto mode for those times where I need my mind to be elsewhere, like those shows I’m also watching while I grindfest through Grandia, FF3 and Legend of Dragoon.

Regardless, the story is really fun and easy going. There are a few melancholy moments, and you do feel for the characters, but for the most part it’s an upbeat feel-good JRPG. I’d say it’s one of my top 5 favorite JRPGs, with Lunar, FFVII, and Bravely Default.