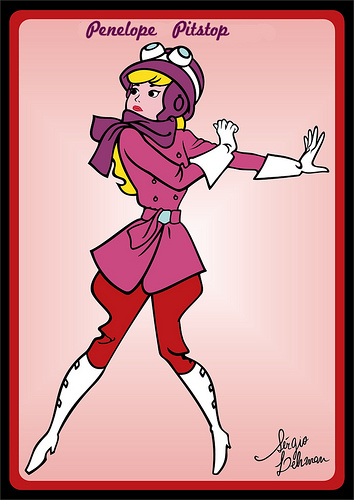 There is a great little local convention called Retrocon; it’s a con dedicated to memorabilia of the past. I went last year and had fun looking at every toy from my childhood and more! My friend bought some old school board games she thought she’d never own again. (Perhaps one of these days I’ll find Flying Finnegan there)

A new cosplay for Retrocon wasn’t in my schedule, so I needed to pick something simple to fit in between my other cosplay, and I needed to already have fabrics on hand. I scoured the web and then remembered I had a great classic character I wanted to cosplay; and it’d be the perfect place to do it!! I had the pink fabric for the coat, and decided to use a really nice dark pink fabric that I’ve been holding onto for the pants. I also had some purple fabric for the hat and scarf, but wasn’t sure I’d go with them.

First stage; research and patterns. I wanted to stay as true to the clothes in that period. The hardest thing about this stage was figuring out what her pants were called!! Two days into it I decided to look up ‘The Rocketeer’ to get some answers; and it worked! Thanks to an awesome costume break down blog post, I discovered they were called jodhpurs. (I didn’t know!) It took a bit of digging, but I ended up finding a pattern for them. Then the coat; the cartoon was made in 1969, so I looked on etsy for coats from that period. There were so many to choose from, but finally settled on one. Next was her helmet/hat; it’s stylized, but for the most part followed the look of a typical retro aviator hat. Her goggles were found online on ebay. (And I bought blue lens replacements on ebay too).

I already had fabrics; not 60’s accurate fabrics, but ones that I really wanted to work with AND already had in my collection. (Gotta use them up!!! So much fabric!)

Pattern for 1920s jodphurs, vest and jacket - retro pattern from the Metropolitan Museum of Art