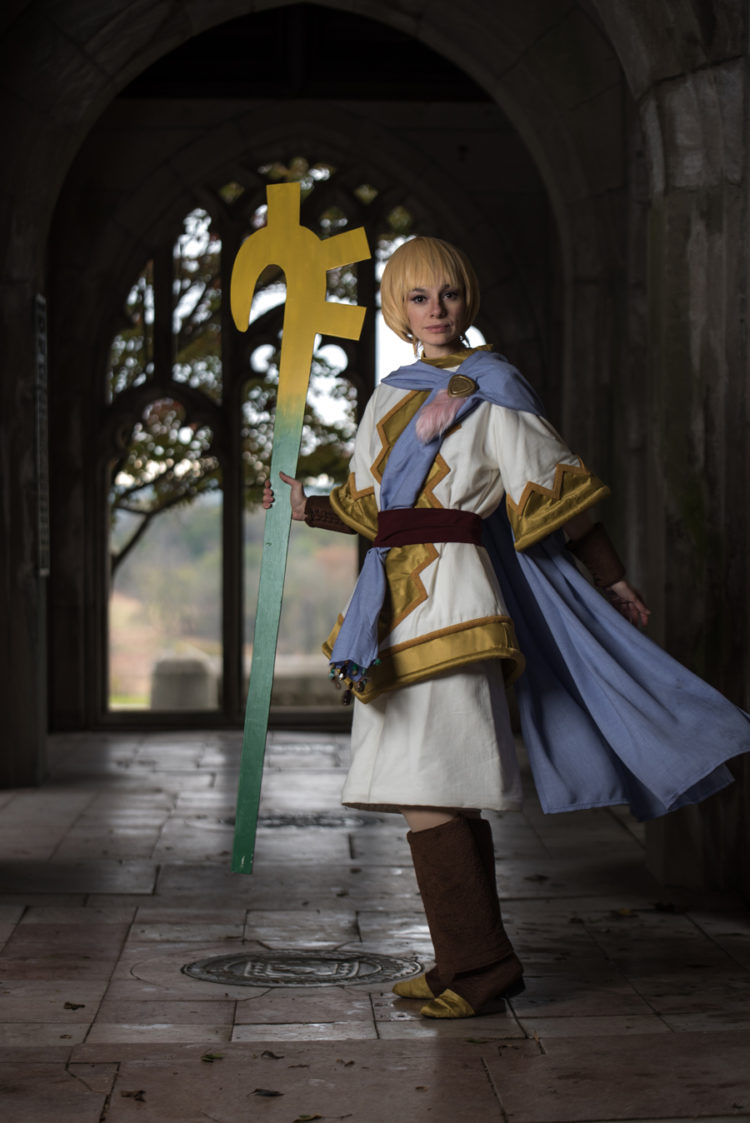 What’s Golden Sun you ask? If you love turn based RPG’s, you should check it out! I would have missed this gaming gem if not for my mentee, Box of Ninjas. Since I started mentoring him in sewing, he spoke highly of the game and decided early on that he wanted to cosplay from it. He lent me the games and I chose to cosplay Sheba to match his Felix. A few years later we met Yucari Cosplay at a MAGFest and we decided the next year we’d put together a large Golden Sun group.

Sheba (and Felix) had been in the queue for years so all the fabrics were already collected. While Sheba seems like a simple design I complicated things because I wanted the costume to be as accurate to the art as possible. Two words were the bane of this cosplay: raised trim. The character designer clearly had an obsession with it and, unfortunately for me, Sheba’s raised trim had more of an angular shape to it than the rest of the designs.

I decided to used eva foam covered in fabric for her zigzag trim….and since the fabric was glued to the foam it was a nightmare to them sew onto the tunic. My fingers cried. With a small pair of pliers and a few good movies I eventually got everything sewn together.

Aaaand a little random fact, when I played through Golden Sun I was really angry that Ivan aggressively force-read people minds right after they kindly asked him to not. NO MEANS NO IVAN. And then of course the power is available for you to use after that and you are going around seeing what people are thinking….anyhoo I read everyone’s mind. EVERYONE. At first when reading some animals’ minds the outcome was underwhelming; ‘moo’ for cow and so forth – some had something interesting to say, but not all. Those animals must have known of my powers but when I decided to read an unsuspecting ram’s mind? Epic. It caught me so off guard I was laughing for days and it’s the whole reason I wanted to cosplay Sheba. Just for a picture of me reading a sheep’s mind. Yup. This is why I cosplay. True story.

MAGFest was kind of a blur; I was sleep deprived and probably incoherent, but we did it! We were only missing one person from the main eight characters! Pretty awesome turnout to say the least!

Please try entering https://graph.facebook.com/1445981315479711/photos?fields=source,link,name,images,album&limit=200 into your URL bar and seeing if the page loads.Facebook API came back with a faulty result. You may be accessing an album you do not have permissions to access.