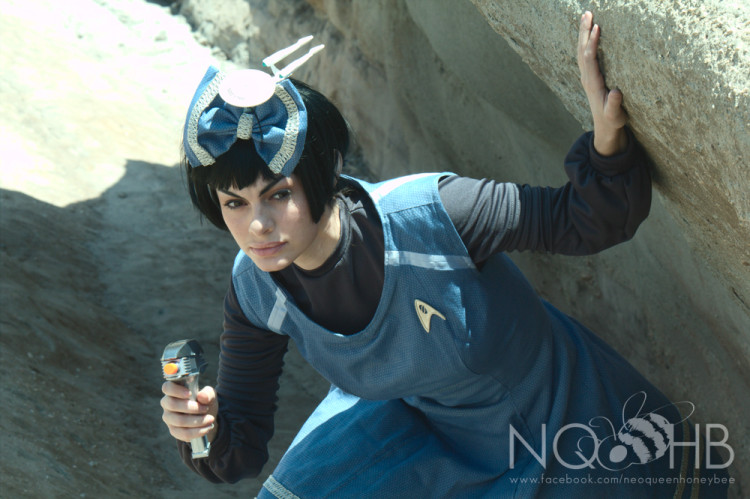 I think my reason for making this outfit was an excuse to buy a Tribble and invisible dog leash. I loved the episode, Trouble with Tribbles, and thought it’d be hilarious to ‘walk’ a Tribble. Then I decided I would do a ‘cross play’ of Spock, since he has always been my favorite…and somehow it made sense to do a Lolita version. Mixing all of my loves, just to own a Tribble. And wear an Enterprise on my head. Yeah, I think that about sums it up.

The outfit ended up being a mix of original and remake designs, totally transformed into a lolita JSK and named Spocklita.

Late to the Fandom

When I was a teenager, if you had asked me if I was a Star Wars or Star Trek fan, who would I be? I would have passionately said ‘Star Wars’. Grew up on the (only) movies (4-6) and loved everything about them. I also wanted to BE Princess Leia; she is a large reason as to why I grew out my hair. However, as I got older I developed a much larger appreciation for the Star Trek universe and it’s characters. Now I’d definitely have to say Star Trek over Star Wars. I’m not even taking into consideration the horrid Star Wars remakes or episodes 1-3; there is just so much to the Star Trek universe that won me over. Thanks to netflix I was able to watch ALL Star Trek series in order of when they came out. And even with the amazing character development of NextGen, the interesting social commentaries of Deep Space Nine, the ever-developing concern of the Voyager, and origin eye-openers of Enterprise, there is still something about the original series. Though, my absolute favorite SciFi anything is Galaxy Quest. Best. Movie. Ever. EVER. And I can fully appreciate it in all of it’s grand splendor because of my love of Star Trek.

By the way, I traveled cross country to take pictures at Vasquez Rocks, a location for one of the the original episodes. And my Tribble’s name is Quellek. By Grabthar’s Hammer….