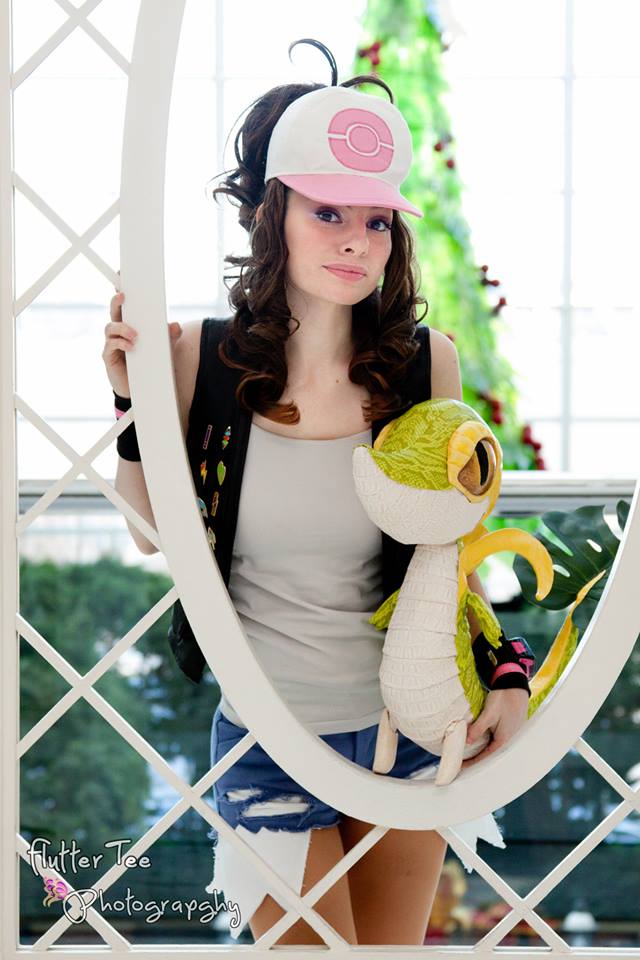 I had been wanting to do a Pokemon Trainer cosplay for so long, and Kris’s hair really intimidated me, so it was between Hilda or Mei (B/W2). Clearly I ended up going with Hilda; I liked her look. She seemed bold, fun and carefree, maybe even a little wild.

Hilda’s outfit is so simple, I really wanted to try getting all the details right; the most difficult one being her Xtransceiver. I wanted that sucker to be real and work. I ended up finding a cell phone watch on Amazon, and painted it to look like a Xtransceiver.

The most time consuming part of this cosplay was my Pokemon ‘prop’, Snivy. I wanted him to be to scale, and to look like he came from this world. I had researched realistic Pokemon designs and found one I really liked; so I used that, and the original design, to create my own. I went with a more lizard look to the eyes, cause 1) snakes don’t have opaque eyelids and 2) I find eye lidded geckos to be very attractive creatures. Though for the eyes themselves, I was trying to go for a Bearded Dragon look, since there are some golds in there that really are gorgeous. (I love reptiles and amphibians, btw)

For the skin, I wanted textured materials; I was fortunate enough to find a green snakeskin, though it wasn’t my first choice, I’m still glad I was able to snag it. I used a cream crocodile vinyl for the belly and found the perfect large leaf at Joann’s.

You can follow Snivy’s creation process, through pictures, here >>

All in all, I was happy with the result. I say Snivy is a ‘prop’ because I really don’t know what else to call him. He’s not a plush or a sculpture…