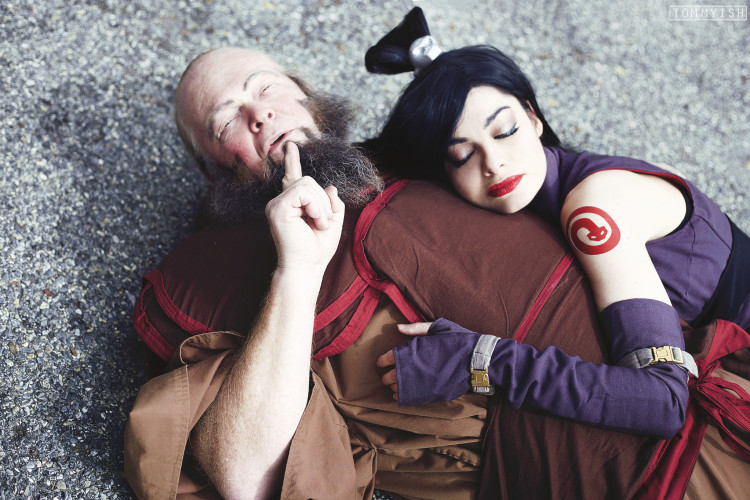 My main push to attend Zenkaikon 2015 was another cosplayer, Jerry, who’d I’ve been wanting to get pictures with for years. We were lucky enough to find each other; I don’t even remember how exactly, but he cosplays Iroh and I cosplay June (Avatar the Last Airbender). We’ve been in communication for at least two years and were finally able to connect! We were also lucky to work with an amazingly talented photographer, Tommyish Cosplay and Photography.

Jerry and I recreated some scenes from the cartoon and made some up, but had a blast doing them all!

Friday was somewhat a slow day after the Iroh/June shoot since I went alone. I mostly played Monster Hunter in the lobby until another friend, Lam Lam Photography and Cosplay, found me. He was working the con, but since he had some free time we hunted together and afterwards he also took pictures of my June! It was cold out, but we both braved the weather and even went out to eat nice hot ramen at Issei Noodle. Mmm, ramen.

Alluka and Illumi Shoot and Gathering

Saturday was the day that Kirato and I decided to attend as Alluka and Illumi from Hunter x Hunter. We drove in together and were sad that our friend Yue wouldn’t be attending as Killua. I had tried finding other HxH cosplayers who’d be attending Zenkai, but was unable to. Kirato and I joked about being the only HxH cosplayers there, and nobody knowing who we were, but immediately found a Hisoka cosplayer (my fave character). Once we found her we began seeing HxH cosplayer after cosplayer! We couldn’t believe it! After meeting and talking with the Morel cosplayer, we decided to spread the word for us all to have an impromptu meet later that day. :)

Kirato and I shot with two photographers in our HxH cosplay; first Tommyish and second TheBigTog.

In between HxH shoots we met at the planned spot to find so many cosplayers! Everyone we had seen earlier and more were there. There was a Silva, 2 Killuas, Hisoka, 2 Kurapikas, Machi, Ging, and Morel.  We joked about not having a Gon, and then Ging mentioned she wouldn’t be there if Gon was. Kirato and I had lots of fun at the gathering and I hope to meet them again some day!